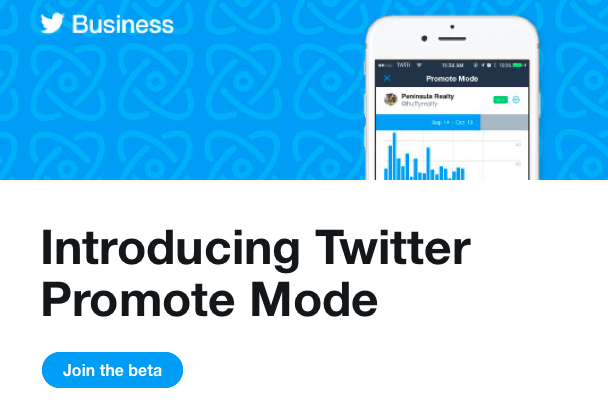 What happened when I tried Twitter’s new ‘Promote Mode’

Recently I received a couple of emails inviting me to join the Twitter Promote Mode beta. The offer is this: For £79 a month, automatically promote your Tweets to your best audience and grow your followers. For once I’m going to give something automated on Twitter a go…

Anything to with social media tech which includes the word ‘automatic’ makes me suspicious. To be fair, if this was offered by a third party I would almost definitely have ignored it. However, I’m so intrigued by this coming directly from Twitter that I’m going to pay my £79 and…. well, what’s the worst that could happen… 😲

I have so many questions about how this works, so I’ll try and learn some more about it over the next few weeks and keep updating this blog post.  It’s apparently designed for accounts with less than 2,000 followers and with the caveat: performance may vary based on factors including your account type, your targeting selection, the type and frequency of your Tweets.

There are some useful snippets in this econsultancy article and various points of view on Twitter itself of course.

Here’s the detail of what you get:

What am I going to test?

I don’t tweet bucket loads of content, but I’ll make sure I’m putting out at least one fresh piece of content every day that something social media related.

Time to get going – what I’ve learnt so far

I’ll keep updating this section with observations and learnings…

So, by hook or by crook the ‘product’ delivered roughly the amount of followers and additional impressions that it said it would.

And in today’s pay-to-play social networking world, I think it’s a good think for small businesses to think about ways to invest (at least a little) ad budget in promoting their content. But I just don’t think this is how I’d recommend they do it.

Sure, it’s super simple… but I was mostly frustrated at the lack of flexibility when it comes to controlling how the tweets are promoted.

I totally get that Promote Mode is supposed to be super simple (and it really is)… but I just think it needs a little more functionality to really add value.

Would you consider using it?