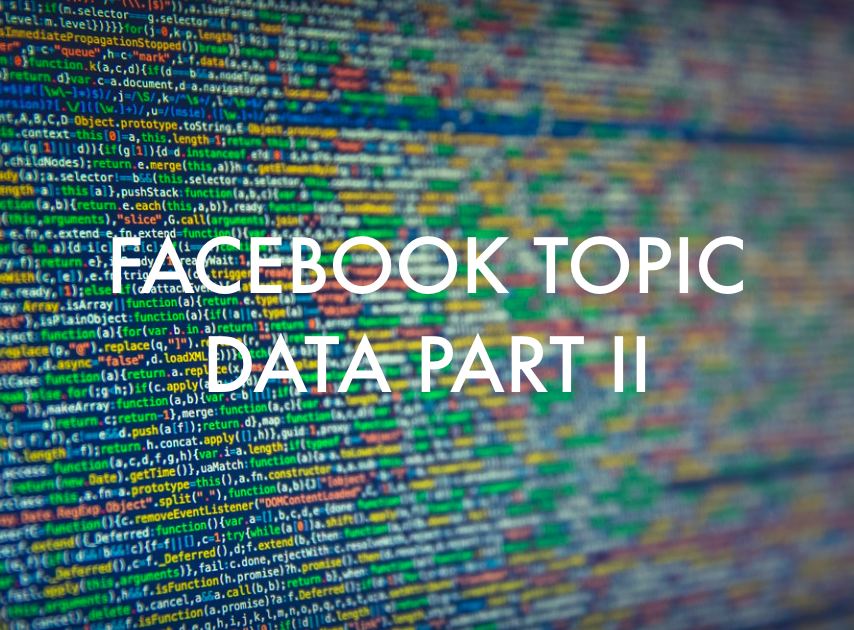 I first wrote about the opportunities that Facebook Topic Data presents in August 2015. Two years later and it’s been a long, winding and ultimately frustrating road for us end users. However, there may be new light at the end of the tunnel with Facebook potentially making a sharp turn in that road… hopefully towards Successville (ok, enough of that metaphor).

When the concept of Facebook Topic Data was first announced, it seemed like a fantastic opportunity for marketers and research teams to get their hands on what was essentially an untapped goldmine of potential insights. Of course *potential* is the key word.

In practice however, things struggled to ever really get off the ground. For whatever reason the processes of mapping the idea to a pragmatic, tangible solution never quite worked out.

Even with the likes of Sysomos and Pulsar integrating the data-set into their products, there remained all manner of complexities and limitations with what could be extracted. It just never quite worked liked you hoped it would.

However, it sounds like Facebook have decided to consider a different approach which should hopefully unlock more value for brands. Flipping it from a rather generic opportunity, to a much more focused campaign planning tool sounds like a smart move.

Ultimately it’s about presenting data that reveals a piece of genuine insight upon which a brand can build a proposition or, at the very least, tailor their communications around.

The other beauty of this data set is that it’s so wide-ranging it should help inform genuine marketing insights, not just something that’s stuck within social.

So, as I said just over two years ago. “It will be interesting to see exactly what the final solution looks like, but from my experience “on the coal face” it looks like a pretty big deal.”

Roll on the next two years!