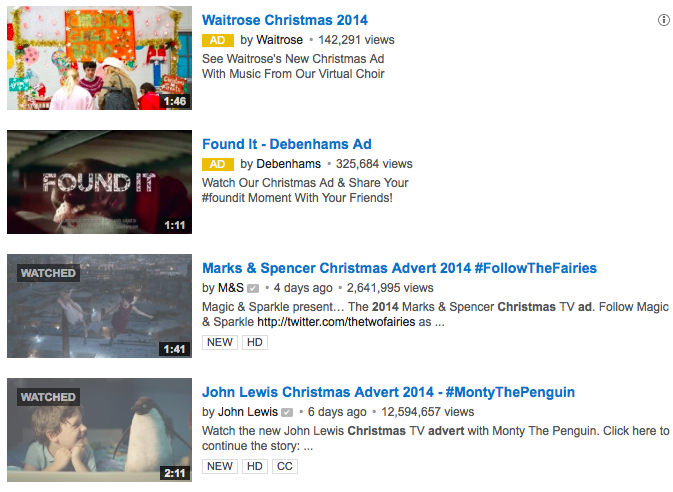 It’s that time of year again, where the major retailers have launched their big Christmas TV ads.  In recent years it’s become a “thing” that people have started to anticipate, and it now even warrants experts discussing the phenomenon in the media – I heard at least three pieces on BBC radio last week.

Of course one of the driving factors behind this behaviour is the ability for brands to distribute their festive masterpiece through social media, particularly YouTube. And in due course the question will be asked – “so who won the Christmas TV ad battle this year?”

Here’s where a little data can be a dangerous thing.

In recent weeks I’ve seen a spate of reports rating brands based on their use of social media. Frustratingly many of these are still using metrics like the number of fans, the number of brand mentions or the % of tweets responded to, to generated their rankings.

Christmas has historically seen some of the worst “reporting of success through social media”. Poor old Christmas, it deserves better. The biggest offence is simply reporting the number of views of a Christmas TV ad on YouTube, and using that as the indicator of success. Some reviews might go a bit deeper and look at the number of comments and “likes” it’s received… a little better (on both those counts Monty the Penguin is currently “winning” this year).

But what rarely seems to be acknowledged (because it can only be measured by the channel owner) is actually how much of the video did people watch. Let’s face it, we all know that a large percentage of these views are going to be paid-for. And many of these will be from those “skip after 5 seconds” ads at the start of other videos.

Does a million views of the first six seconds of your ad really achieve what you intended?

And what about the role of other platforms like Facebook and Twitter, which have their own built-in video players these days? Will those be considered in the final shake up? Unlikely.

Don’t get me wrong, there’s absolutely a role for paid media, and video views certainly shouldn’t be discounted as a metric – but only in the context of all the data around your video content.