For an initial point of view without obligation, get in touch:

Thanks to unsplash.com for the lovely images

How to setup a Snapchat on-demand geofilter

Posted by Simon on April 11, 2016 in Optimisation |One Comment

As Snapchat becomes an increasingly mainstream platform, I thought it was high time to test out an on-demand geofilter.

Starting at $5, they allow anyone to create a Snapchat filter which appears in a selected location for a given period of time. Check out the Slideshare below for a step-by-step guide of our experience.

I picked an area of 198,97 sq feet (according to the website!) and ran it for 4 hours from 9am, costing $5.  The setup process was simple to follow – you just need a little creative spark for the artwork you’re going to create (I kept ours pretty basic as you can see!). 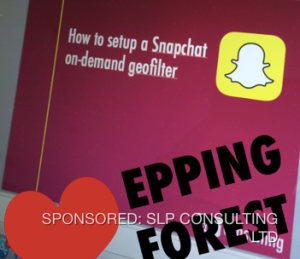 Everything ran like clockwork. I opened up Snapchat at 8.59am, no filter. Then, as planned at 9.00am BST it appeared, right on cue. I then took a stroll around the geofilter’s “fence” (border of where the filter is active) and I was mightily impressed by the level of accuracy.

The only thing I didn’t expect was the little note that pops up to say that the geofilter had been sponsored. Would this put people off from using it… perhaps.

Like any new social platform feature it will eventually hit a point of saturation or lose its novelty, but right now these look like a great way to engage a certain type of audience – especially if you’re a venue owner or event manager.

Do you use Snapchat? Have you tried a geofilter? I’d love to hear. You can find me on Snapchat at: simonlp2

This site uses Akismet to reduce spam. Learn how your comment data is processed.