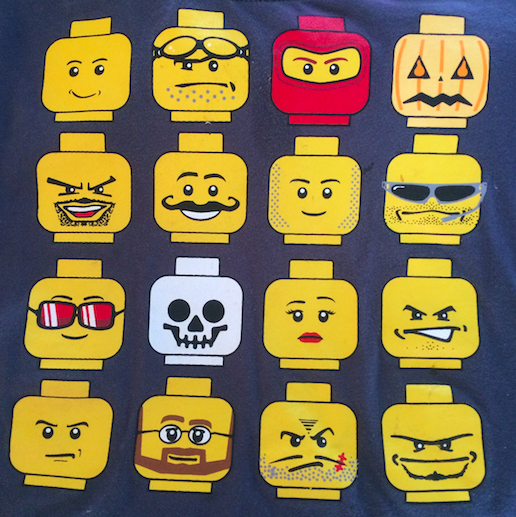 What’s your Lego head? How the toy manufacturer built a content masterclass.

Lego is one of the biggest toy companies in the world, with tie-ins to huge franchises such as Star Wars and Harry Potter. However, take a look at their humble “mini-figure” and you’ll find a content masterclass.

Whether I’m talking to global brands or local startups, one of the most frequent conversations I have is about “content formats” for social media publishing. The ability to create a consistent style of message whilst reflecting something relevant to the “here and now” is an essential pillar of any digital content approach. The benefits are clear:

But now I have a new favourite…

On our most recent adventure to Legoland we picked up a souvenir T-shirt for my son (and yes, I was very tempted to buy one for myself). Here’s the one he chose:

Looking at it the other day, I reflected on the Lego sets I had as a child. I realised that although there are now many more variations on the “mini-figure” head, they’re all based on that original shape launched in 1974.

Whether it’s a simple smile, bestubbled villain or masked ninja they all give a sense of familiarity and form. Each new creation begins with the same basic building block (kind of pun intended) and evolves from there – like all good content formats. It doesn’t matter whether it’s offline, online or both.

Content formats are in Lego’s blood of course. This series of characters, using nothing more than different coloured square blocks, probably remains my all-time favourite.

So, next time you’re thinking about creating an ongoing series of content, have a rummage through the toy box and ask – “what’s our Lego head?”