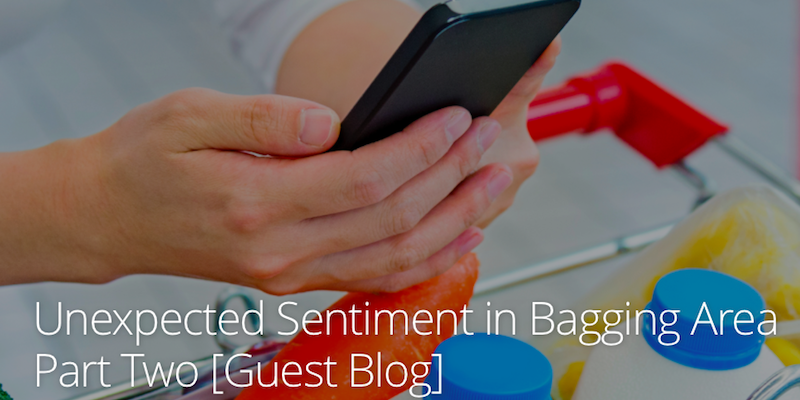 Unexpected Sentiment in the Bagging Area: Part 2 (our guest post on Crimson Hexagon)

This post was originally published on the Crimson Hexagon blog on 19th October 2015.

A couple of weeks ago, Part One of this post outlined how I thought the new 5p plastic bag charge in England might play out across social media. I discussed the fact that the law itself isn’t exactly straightforward (there are instances when you still qualify for a free bag) and people are highly entrenched in plastic bags being ‘free’. My hypothesis was that this combination of factors would become a prime topic for confused and/or frustrated shoppers to vent their experiences on social media.

To analyse the data and understand what happened, the Crimson Hexagon team analysed social media mentions of the 5p bag charge between the 5th October and the 12th October 2015.

What we found was unexpected and didn’t all match the original hypothesis. However, rather fortuitously the main conclusion fitted rather neatly with the title of the post…

Let’s start with a wider perspective, and how the story broke on mainstream media. Unsurprisingly it was headline news on the day the charge was introduced, as details of the new legislation were discussed. Then we began to see stories appear about (let’s say) ‘industrious’ shoppers ‘borrowing’ baskets and trolleys  to avoid paying the charge. In the most extreme case one shopper decided it would be a good idea to mark the event by getting himself a tattoo!

With that context in mind, we dived into the data, beginning with the volume of mentions. The headline was as anticipated – a large spike in conversation on the 5th October, which dropped away after a couple of days. However it was noticeable that the conversation didn’t drop away to zero, there remains a noteworthy level of chatter around the topic.

We then looked into which conversations were generating significant interaction. This actually revealed two points that social content creators should be familiar with– the popularity of the English sense of humour and our love of ‘human truths’.

Time and again we see successful Twitter accounts such as @SoVeryBritish call out the mundane but slightly ridiculous things many of us do in our daily lives! That feeling of ‘so it’s not just me then!’ taps into a deeper, tribal part of our psyche… and we can’t help but to give it a re-tweet.

Another aspect we investigated was the difference in conversation across the major grocers, as they would be impacted the most by the charge. For each brand there appeared to be at least one issue or incident that exploded on Twitter, be that a prank video (ASDA) or placing security tags on baskets (Tesco).

We observed that the volume of online conversation specifically about the 5p charge was broadly proportional to the usual volume of mentions each brand receives. The notable exception was Marks & Spencer who are usually on a par with Tesco for social media mentions (based on search of general mentions in September 2015), but who actually saw very few relating to the 5p charge. Although this can be neatly explained by the fact M&S have been charging for bags since 2008, it suggests a potential missed opportunity. Could this point have been pushed harder to drive awareness that M&S were 7 years ahead of the game?

At this point the data was showing broadly what we had expected… until that is, we looked at Crimson Hexagon’s Opinion Analysis.

We were anticipating conversations full of doom and gloom, complaints about confusion at the checkouts and people trying to beat the system. And as I watched the story unfold in the mainstream media that’s what I saw, as The Mirror reported that  things turned “ugly”, and similarly The Daily Mail noted how shoppers were “treated like dogs”.

However by drilling into the wider conversation, not just those shouting the loudest, we uncovered what was indeed “unanticipated sentiment in the bagging area”. The theme of conversation by the typical person in the street (or shop!) was actually positively discussing the environmental benefits of the scheme.

Yes, there were angry people having a rant and yes, the whole thing frustrated many people. However the analysis demonstrated the very different perspectives a story can take when we listen to the crowd (via social media) compared with traditional media.